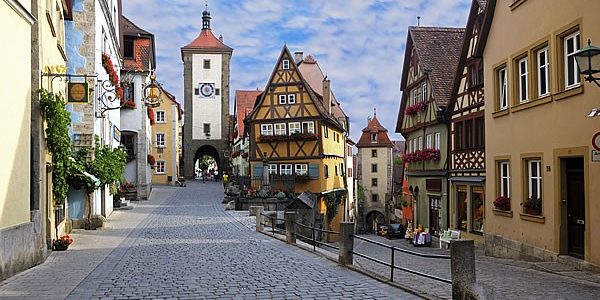 The German Romantic Road is one of the biggest magnets for tourism in the southern provinces of Bavaria and Baden-Württemberg. Based on the old Roman route between the participating towns and adding in some stunning medieval locations to the north, the concept of the Romantic Road has grown over the years into one of Germany’s most travelled tourist road.

The medieval villages and towns, the cobble streets, the hanging flowers, the town squares, the castles, the amazing old houses, and the friendly taverns and hostels along the way make it the perfect destination for a week of fun and serenity in a middle age setting. Read more.

The route combines the historic cities of Würzburg and Augsburg with the three medieval walled towns of Rothenburg ob der Tauber, Dinkelsbuhl, and Nordlingen, and then finishes off with the tourist highlights of Neuschwanstein Castle and the Alps.

Part of the charm of this region is the discovery of walking trails through the vineyards in the Tauber valley or the traditional villages and churches of the Pfaffenwinkel. There is also plenty of history and culture to soak up along the route.

Würzburg is often where a visitor decides to start their tour of the Romantic Road route through southern Germany – and it is a fine introduction to the trip. The city itself is set in a beautiful hilly location on a river and possesses a wealth of history, as well playing host to a UNESCO World Heritage site in the Residence palace. It is also smack in the middle of one of Germany’s biggest wine-producing areas and has superb connections to other parts of the country.  Much of the history of the city centers around the Prince Bishops and their two main homes over the centuries: the Marienberg Fortress and the Residence Palace.

Tauberbischofsheim is situated at the western end of the Tauber valley – marketed heavily in German as the “liebliches Taubertal” (“the lovely Tauber valley”). There are a number of very pleasant small villages and towns along the country roads: Creglingen, Bad Mergentheim and Lauda Koninghofen amongst them, before you reach Tauberbischofsheim. As a literal German translation would suggest, the town came to prominence through its connection with the bishop and the abbey that was built here. Nowadays it is one of the first stops on the Romantic Road heading south from Wurzburg and it is a good stopping point for those concentrating on the Tauber valley and its walking and cycle paths specifically.

Rothenburg ob der Tauber is at the other end of the Tauber valley and is perhaps the best-known of all the medieval “sights” on the Romantic Road. Along with its two neighbours (Dinkelsbuhl and Nordlingen to the south) it is a prime example of a walled medieval town – one of the only ones left in Germany – and its beautiful buildings, walls and alleys have led to it becoming one of the most popular tourist destinations in Bavaria.

Augsburg can trace its history back way beyond the medieval heyday of its neighbours on the Romantic Road. Founded before the Roman control, it was named Augusta Vindelicorum when they gained power in the region and built the trade route stretching between northern Italy and their new powerbase in southern Germany. With such a long and rich history, Augsburg has plenty of sights to visit such as Town Hall, Bishop’s palace and the cathedral.

Füssen is an attractive Bavarian town at the foot of the mountains with the river Lech running through the town. It has an interesting historic center and plenty of sights nearby – the world-famous Neuschwanstein castle ( Original model for the Disney castle in Florida)is just a short journey away near the neighboring village of Schwangau.The town is the end (or beginning) of the Romantic Route and also makes a good stop-off point on the way along the German Alpine Road.