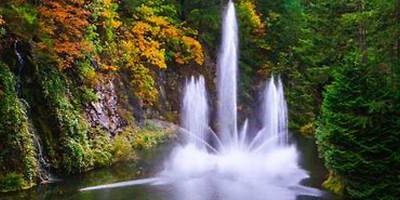 The Ross Fountain is part of the carefully curated Butchart Gardens in Victoria, British Columbia. It’s named for Ian Ross, the grandson of the garden’s founders. The Butchart family moved to Victoria in 1904 to be close to a limestone quarry essential to the original family business of cement making. When the quarry was depleted, in 1909, Jennie Butchart started the garden. Ross was largely responsible for the site’s expansion and development in the later 20th century, helping to turn his grandparents’ vision into a reality and making the gardens one of Victoria’s most popular attractions.